I had a lot of ideas for the next post... I really wanted to have a look at another problem of humankind: climate change, wealth distribution or perhaps gender equity. There's so much interesting data beyond the SARS-CoV-2 pandemic! But: the new variant of our most popular pathogen dominated the news of the last four weeks, fueled people's fears and hopes at the same time and spoiled my plans. Yes, your right, that's the Omicron, coined a 'mild' or 'cold-like' coronavirus and expected to change the way we experience and manage the pandemic. Does it hold true? I had to crunch some data to convince myself...

I allow myself to skip an extended introduction on Omicron: it's omnipresent in media and European populations - the chances that you have already experienced an infection or experience one in the forthcoming four weeks are quite good. To sum up:

Well, the first two properties are quite indisputable. The key question absorbing the most of the European governments, task forces, expert rounds and mere mortals is how and whether to react.

In this post I basically re-used the pipeline I had coded for the previous issue handling the Delta variant and vaccination efficacy. The purpose was to feed a machine learning algorithm (or artificial intelligence, if you wish) with as much data as possible concerning the Delta coronavirus and let it predict the daily case numbers, hospitalizations, ICU occupancy and, finally, daily victims during the Omicron outbreak.

Few words about the technique - you may skip them if not a data freak. As before, I explored the recent SARS-CoV-2 data set provided by Our World in Data (OWID) and took a closer look at four countries struggling against the pathogen: Denmark, France, Italy and United Kingdom. The available explanatory parameters were daily case numbers, tests, hospital and ICU occupancy, frequency of the population vaccinated twice and the percentage of boosted (3rd dose) inhabitants - scaled to the population - as well as stringency index, i.e. the measure of containment management. For the daily incidences, hospitalization and ICU rates, I also included lag variables: the counts from the last 21 days - again: this is an infectious disease and an average hospitalized patient stays at the COVID-19 ward for days if not weeks. The training data set spanned between 2021-06-15 and 2021-12-20, when Delta was the predominating pathogen. The robustness of prediction was initially tested in both with the training data - I wanted to know if my model predicts the past event counts - and 10-fold cross-validation - to emulate the model predictions with the data not seen before. The algorithm of choice was the Random Forests which proved reliable in the previous post. Finally, I employed the Random Forests models to the Omicron outbreak (from 2021-12-21 on) to compare it with Delta. The code and extra graphs are available at my GitHub.

Results: you'd rather not neglect Omicron

Omicron is believed to cause milder COVID-19 as compared with Delta with less frequent systemic and lower respiratory manifestations (see our research). At the same time it spreads faster and grabs the previously immunized reservoir. Hence, it's quite challenging to asses the effects on the health care system. In fact much more infections even if with a lower risk of critical course may be similarly vicious for our hospitals, planned and emergency care.

My results suggest that exactly this phenomenon may occur. As you may appreciate for United Kingdom in Figure 1, and for the remaining analyzed countries in the code repository, the machine learning approach has no problems with predicting backwards the daily incidences, hospital, ICU and victim counts - I'm always taken aback by seeing how my algorithm 'recognizes' the peaks or weekly rhythm of new cases! What is even more shocking: it fails to do so for the Omicron outbreak... Not only dramatically less new cases (3-fold) are expected those days, given that Delta was the dominant bug, the time of year and the extent of immunity. But also: there are twice as much hospitalizations and slightly more ICU patients than expected for Delta and the epidemiological status of the investigated populations. Interestingly, the mortality seems not to change much, however, we are still at the onset of the outbreak. 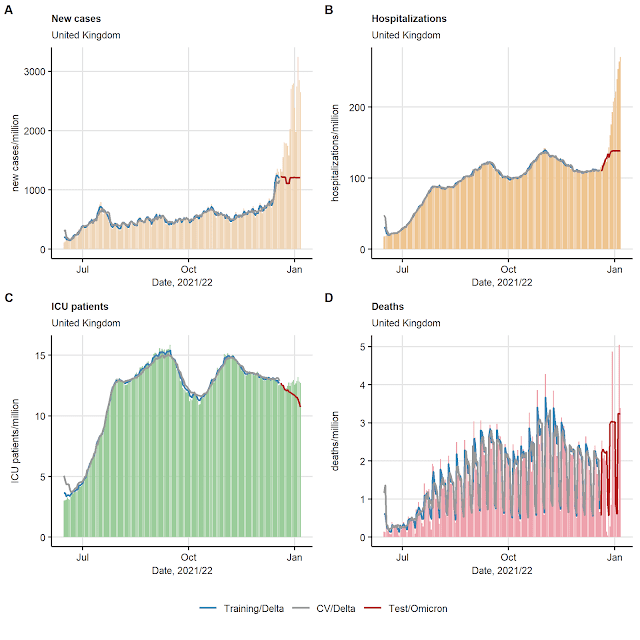 Figure 1. Predictions of daily incidence, momentarily hospitalization and ICU counts and daily COVID-19 deaths in United Kingdom by the Random Forests ML algorithm. The Random Forests models were trained and cross-validated (CV) in the period dominated by the Delta SARS-CoV-2 (2021-06-15 till 2021-12-20, training data set) and the counts for the Omicron variant were estimated (2021-12-21 till 2022-01-06, test data set).

Let's have a look at the residuals - i.e. the differences between the predicted and actual event counts - to get some idea about the hard figures (Figure 2). For UK, this means up to 2000 cases extra per million inhabitants, i.e. 136,000 infections a day. Similarly, Omicron causes up to 130 hospitalizations per million inhabitants more that Delta alone, for whole UK, this translates to roughly 9000 extra hospital admissions since 21st December. In turn, the Omicron outbreak seems to spare the ICU: even though this looks pretty drastic in the plot, there is up to 2 per million or approximately 140 more ICU patients. Furthermore, there's no evident trend for the daily mortality.

Importantly, this is not a UK-specific phenomenon. Way more cases and more hospitalizations as it could be inferred for Delta and high immunity rate are seen in Italy, France and Denmark as well (Figure 3). Concomitantly, there increases in ICU occupancy and mortality are far less accentuated. 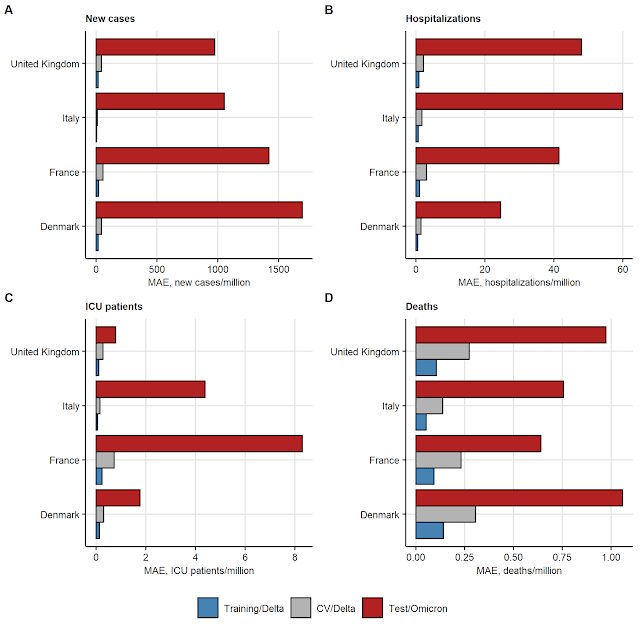 Figure 3. Mean absolute errors (MAE) for daily incidence, momentarily hospitalization and ICU counts and daily COVID-19 deaths in the countries struggling against the Omicron outbreak. The Random Forests models were trained, cross-validated (CV) for the Delta and the figures for the Omicron virus were estimated as described in Figure 1.

Do these data support the general hype about funny cold-like virus? No. If there were no other pathogen variant than Delta around, we would enjoy a relaxed winter - at least those vaccinated - with decreasing incidences, fatality, empty COVID-19 wards, no worries about infrastructure and with normal social life. What we also see there: the machine learning uses vaccination frequencies and the number of COVID-19 convalescents as important explanatory variables to predict new cases and hospitalizations caused by the Delta pathogen (Figure 3). This is an important, yet not direct indication, that the Delta outbreak could have easily be controlled by the rising grade of population immunity! 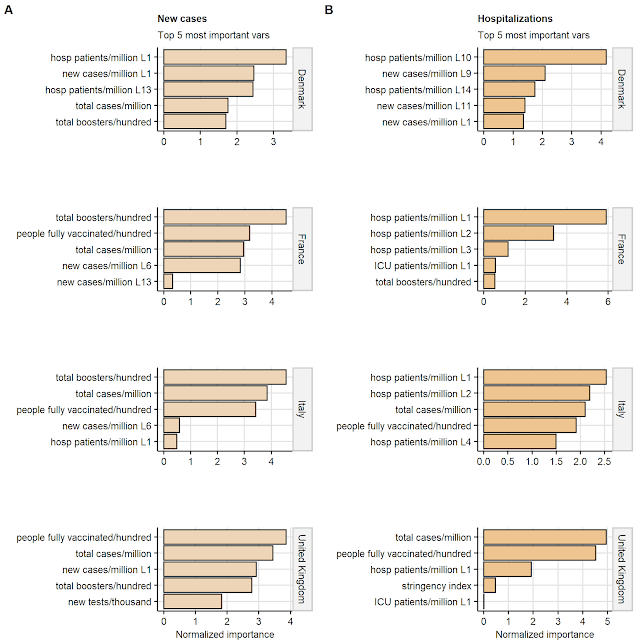 Figure 4. The most important variables used by the Random Forests models trained to predict daily incidence and momentarily hospitalization counts. The Random Forests models were trained, cross-validated (CV) for the Delta and the figures for the Omicron virus were estimated as described in Figure 1.The importance was obtained by variable 'noising' technique as proposed by Breiman (DOI: 10.1023/A:1010933404324). L indicates a lag variable.

However, the protection governed by the vaccination and recovery, which saved thousands of lives in 2021 (see in my previous post), means nothing to Omicron. The risk of ending up in a hospital with 2 or even 3 doses of the vaccine is dramatically higher than for Delta. As written previously, I resist the temptation to calculate it with the machine learning predictions, I'd rather crunch once the hospitalization data in respect to the vaccination status - but this is another story!

What is the bigger picture?

Here, I'm not questioning that Omicron on its own causes a less severe infection than Delta at the level of single individual. In fact, this is a lucky coincidence to have a transmissible and less pathogenic bug. You may imagine a highly transmissible deadly and immunity-avoiding virus as well. There is a real risk that such one emerges in the future, if we let SARS-CoV-2 sweep around the globe. For those who were kids twenty years ago: there was once SARS-CoV-1 endowed with such nightmare features. Apart from that, my data demonstrates clearly, that Omicron may well pose a similar risk to our healthcare systems as Delta, just because it may infect much more people and also those fully vaccinated.

At the Austrian playground, where the Omicron outbreak is still a fresh phenomenon, giving up the trace-and-test, quarantine and contact-reduction strategy as announced yesterday (access on 2022-01-07) seems to me at least risky not to say reckless. By extrapolating the estimated extra counts in UK onto the 9-million Austrian population, one can expect between up to 18,000 infections per day and roughly 1200 hospital admissions in the next two weeks. Even worse, many of the affected individuals will be those who have done everything so far to fight off the pandemic: vaccinated, recovered, tested and obeying all the rules. It's not likely that this boosts the acceptance of containment management and vaccination in the long run. And one is certain: the pandemic is not over, when Omicron is over.

Popular posts from this blog 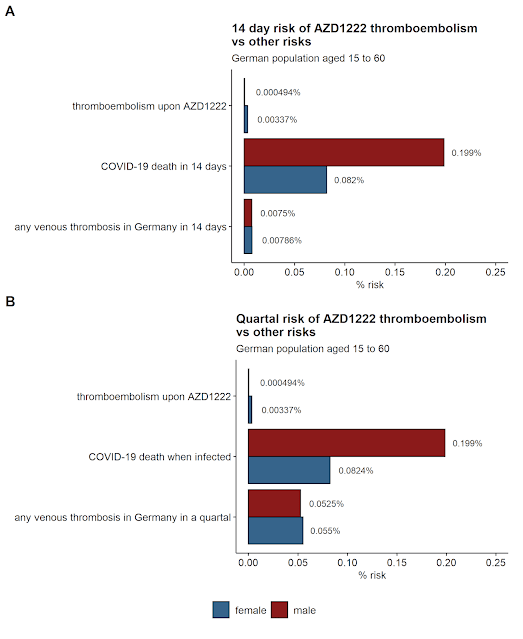 Before I begin, I probably need to declare that although I'm a great enthusiast of vaccinations and got a more or less complete list of shots in my life, none of the pharma companies nor Bill Gates have ever offered me shares, honoraria or even a free vaccination. In other words I'm entering this topic highly influenced by subjective opinions and conspiracy theories without any financial conflict of interest and do my best to present you 100% scientific data.   COVID-19 vaccination was promised to be the next topic - it was already a while ago, cause I'm involved in two huge COVID-19 human studies and didn't find enough time for my blog. But I hope, I can report on our, still highly confidential, results in the nearest future.   Initially I thought: let's discuss the principle of vaccination and particular drugs, have a look what was published about efficacy and safety and, finally calculate, if getting an anti-SARS-Cov2 shot is worthwhile. But, I didn't expect
Read more 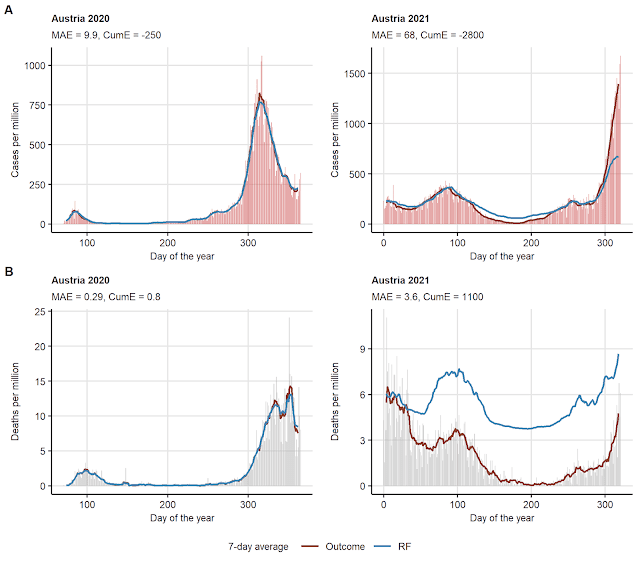 COVID-19 vaccines do not work against Delta   Our hospitals are full with vaccinated patients   I'd rather wait for an inactivated vaccine   Two third are vaccinated and there's a lockdown again...   I've got my jab and got CoV afterwards, what a junk (des isch a Klumpert)!   I wear a mask, keep my distance, go testing, why I should let me vaccinate with this poison?!   Heard on the street, playgrounds in Tyrol and seen in social media in Austria these days.     Daily incidences breach every record, breakthrough infections rate climbs toward 50%, the national health care is approaching a collapse, the surprised government seems to have no idea... Hey, but two-third Austrians are fully vaccinated, what went wrong? The politicians claimed: the pandemic is over, CoV is gonna be an individual medical problem, it is this a pandemic of unvaccinated.   This motivates me to write this post. Does the anti-SARS-CoV-2 vaccination works against the Delta virus paralyzing our hospitals
Read more

Piotr Tymoszuk
Innsbruck, Austria
A great enthusiast of data, statistics and modeling. Since over 10 years a passionate professional user of R language